It’s quiet here this morning at 6am.  The humidifier, which makes the air in our Chicago apartment breathable, hums trying to keep up with the intense dry air.  I pull one of my shades to find the sun rising outside my east window.  It has not broken the horizon yet, but its light sprays layers of dark purple to salmon-y pink atop the grey of the lake.  Only a few windows in the 40-story highrise across the street are lit.

It was a year ago today, November 23rd, that a friend, Nikki Zabriske, and I took Margo to the emergency room.  We were in Michigan celebrating Thanksgiving.  Margo had felt ill for 3 days.  With intense headaches, persistent nausea, and other odd symptoms, we finally took her to the ER after she had collapsed.  While in the ER at admittance, her neurological symptoms first manifest.  Suddenly she began speaking in a pronounced lisp.  About the same time, dysphasia and disorientation mildly set in. 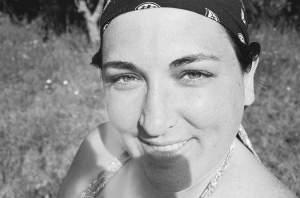 Within three hours, the doctors accurately diagnosed her with a rare blood disorder we couldn’t pronounce and never heard of before:  TTP, (Thrombotic thrombocytopenic purpura) It affects only about 4-6 million. There was little to any available prognosis.  TTP was a roller-coaster ride.  Everyone manifests the disease differently.  For some, it’s an annoyance.  For others, they lose organs…or, due to the complications of the global clotting caused by TTP, die.

Some of the things I witnessed during those first three hours were enough to change my life.  But, I had no idea what awaited me the next thirty days. Margo would have one of the most severe episodes of TTP I’d read or talked to others about about.  Margo was unconsious about two-thirds of that month.  She had seizures, dark and terrifying delerium, countless CT’s to search for bleeding, and was in and out of ICU twice.   Her episode ended only after two visions Margo had about choosing to live or die…and rounds of chemo.  I didn’t learn about these visions until after she awoke out of almost three weeks unconsciousness.

If anyone wants to read or revisit those days, click here or go to http://www.carepages.com/carepages/MattMargo.  If you still want to make a difference, give blood this week.   Margo went through dozens of packs of red blood cells and 200-300+ units of plasma.

So many things happened to us that month, I cannot begin to tell you.  Margo and I had parallel journeys.  Margo’s mother and I witnessed everything together: the daily blood draws, the paralysis, the fingerprints left on her body when we had to move her, and the sobriety of the doctors’ and nurse’s faces.

A year later, Margo and I still think about how our lives have changed.  I realize how much I’ve mellowed.  We don’t know if Margo will ever relapse, or if so, how that relapse will go.   We talk about how some things just don’t matter anymore.  Margo expresses how a cloud of depression over her life is gone.

Something like this puts life in a different perspective.  Margo talks about how real the words of the 23rd Psalm are for her now.  Especially, the fourth verse:  “Though I walk through the valley of the shadow of death, I fear no evil, for you are with me…”

My prayers go out to everyone who walked with me on this journey, especially my friends who reached out and encouraged me at the TTP/thrombocytopenia Yahoo group.  Prayer and community sustained us and kept me together.